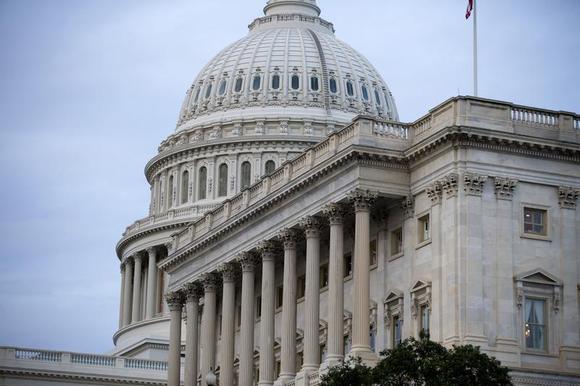 Such a deal would not address an increase in the federal borrowing limit, which is expected to come up again by the spring, leaving conservatives a pressure point to try to exploit.

However, it might restore some order to the federal budget process, which broke down years ago and has been replaced by stopgap funding measures, accompanied by brinkmanship and shut-down risks.

“If this holds together, it is a very good story,” said Greg Valliere, chief political strategist at Potomac Research Group, which advises institutional investors.

“The chances of another Washington budget crisis have diminished greatly, and I think it increases the chances that the economy surprises to the upside,” he said.

Two U.S. senators on Sunday expressed optimism that a two-year budget deal could be reached soon. Republican Senator Rob Portman, who sits on the House and Senate negotiating panel, told the ABC program “This Week” that he was hopeful an agreement could be struck “by the end of this week.”

Richard Durbin, the second-ranking Senate Democrat, said the talks were “moving in the right direction.”

Some argue that the deal, which would trade some of the sequester cuts – perhaps $30 billion to $40 billion a year – for a mix of fee-based revenues and other savings, would mark the death of ambitious efforts to reduce deficits.

“I don’t really see a natural way for there to be a grand bargain during the rest of the Obama presidency,” which ends in January 2017, said Robert Bixby, executive director of the Concord Coalition, a nonpartisan group that urges fiscal responsibility.

The negotiations under way stem from the deal that ended the government shutdown in October, which set up a House-Senate conference committee led by Republican Representative Paul Ryan and Democratic Senator Patty Murray.

They are still struggling to pin down the final details of their modest compromise before the House ends its session for the year on December 13.

Among the proposals under discussion are a doubling of airport security fees levied on airlines to about $5 per ticket, and a plan to require federal workers to contribute a higher percentage of their income towards their pension plans, according to people familiar with the talks. Other items include funds raised by auctioning some government-held telecommunications airwaves or hiking corporate fees for the U.S. agency that protects workers’ retirement funds.

Democrats have objected to the hike in federal employee’s pension contributions, which they view as a benefit cut.

Republicans backed by the conservative Tea Party movement also are objecting to the idea that a Ryan-Murray deal could push spending levels above the $967 billion cap set by the sequester, sacrificing what they view as essential savings.

If no House Democrats vote for a Ryan-Murray deal, the Tea Party group is large enough to prevent its passage.

After the public relations disaster suffered by Republicans as a result of the October shutdown, few conservatives are showing any interest in a repeat performance.

“I don’t think there’s any use of government shutdown threats if we can get something out of the conference committee,” Representative Blake Farenthold of Texas, a Tea Party supporter, told reporters on December 3. “I think we’ll get bipartisan support on something a conference committee comes up with.”

Obama and his fellow Democrats in Congress also have warned that they want a one-year extension of federal unemployment benefits that are set to expire the end of this month. A Senate Democratic aide said on Saturday it was still unclear whether such an extension would be included in the deal.

While the savings would be small, the deal would bring some much-needed order to a chaotic budget process in Congress that has broken down over the past few years, leaving Congress lurching from one stopgap funding resolution to another.

House Appropriations Committee Chairman Harold Rogers, a Republican critic of the deep sequester cuts, said he is now willing to live with only modest relief, and is determined that Congress pass annual spending bills for the first time since 2009.